In today’s fast paced jobs market is not uncommon for employees to move on to a new opportunity every few years.
In fact, it is estimated today’s young people may have as many as 17 employers in their lifetime!
So when Flowserve’s Castlemaine pump division stalwart Gordon Brown recently notched up an extraordinary 50 years of service at the local foundry, it was certainly cause for celebration.
Gordon told the Mail he started work at the foundry, then known as Thompson Kelly and Lewis, as a 16-and-a-half-year-old.
“I was tired of school and my trade teacher suggested I approach Thompsons to see if there were any opportunities available,” Go 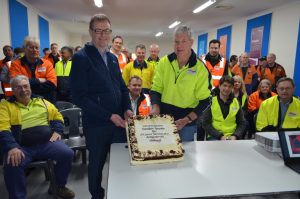 rdon said.
“I approached them early in the week, got a positive response and returned to school on the Friday to let the headmaster know I was leaving indefinitely.”
“He was delighted and wished me the best of luck with my apprenticeship.”
Flowserve general manager operations Australia/New Zealand David Boak said that Gordon’s achievement was remarkable.
“We regularly present service awards for 10, 20, 30 and 40 years service but when I saw Gordon’s 50 year award it really made me stop and think. This employee has devoted his entire life to the company and that is something that we as a company, Gordon’s family and of course Gordon himself should be very proud of,” Mr Boak said.
Flowserve employees celebrated the milestone with a cake, the presentation of a certificate and gift followed by a luncheon.
Gordon said when he started at Thompsons, which was founded in Castlemaine in 1875, there was more than 600 employees.
“I feel fortunate to have survived the various restructures. I’ve had to adapt to suit the changes and have worked in numerous roles, predominately in machining, including the role of supervisor.”
Gordon said when he started with the company work was carried out in gangs where the older more experienced workers would pass on their skills and knowledge to the younger workers.
“I’ve seen many characters before me achieve their 50-year milestones so I guess that really inspired me,” Gordon said.
“I appreciate everything the role has given me, it has help put a roof over my head and put our children through school.”
Gordon said he has certainly seen a lot of changes at the foundry in his time.
“It was all pen and paper when I started back in 1968, there were no computers! There were also big changes when we moved from the imperial system to metric,” he said.
Nowadays Gordon works as shop controller and spares using his extensive knowledge to ensure everyone has the components they need and everything is running smoothly.

Get set for Easter fair fun